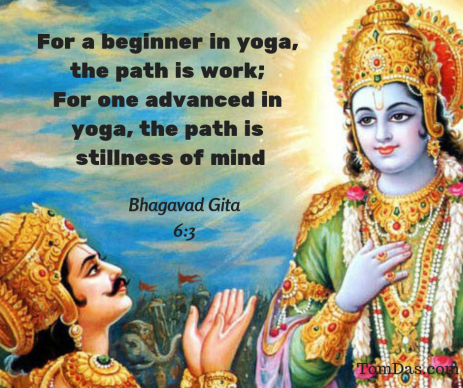 In the original Sanskrit, the word translated here as ‘work’ is ‘karma’. In the the preceding chapters Krishna has taught Arjuna about spiritual practice during activities, ie. karma yoga, in which the mind is made calm during activities by various means.

Now, in Chapter 6, Krishna teaches Arjuna that eventually the path of work leads to the path of stillness, and it is through stillness of mind that one advances in yoga. The rest of Chapter 6 explains in more details how this is to be done.

Whilst everything is nothing but the Self and nothing is ever apart from the Self, the Vedanta texts often speak of abiding as the Self.

This means to still the mind so that it is undisturbed and lose any notion of being a separate ‘I’ or ‘me’. Here we just abide as pure consciousness or pure knowingness, devoid of thoughts and phenomena, devoid of egotism.

This is pure ‘knowledge’ beyond knowledge, direct ‘experience’ beyond experiences, the ‘peace’ that passeth all understanding, Silence, beyond words and chatter.

One of my favourite spiritual books is the Bhagavad Gita. It, perhaps, is the reason I stumbled into my love of what could be called Eastern Spirituality or Eastern Mysticism, and the Gita was one of the first few holy texts I read. It contains a number of different but intricately related teachings that, together, knit the fabric for a beautiful teaching. It also has an epic and somewhat unusual setting, for a spiritual text at least, namely the battleground of Kurukshetra in which Arjuna is seeking advice prior to going into battle from his charioteer, Krishna. It just so happens that Krishna is in fact God incarnate, and so a wonderful dialogue and spiritual discourse commences.

I do not consider the Gita to be a perfect text, for a number of reasons which I will not delve into in this post, but for many years it has seemed to me that there is a glaring error in its current format, one that I have not heard much of, and one that can be easily rectified. In fact, when this error is seen and rectified, the Gita, in my opinion, is much more satisfying to read, albeit still with its imperfections.

What is the error? It is that Chapters 3 and 4 are the wrong way round. It took me a while to figure this out, and I wonder if this idea has occurred to other people too? A quick google search has not revealed to me that other people have noticed this. However, surely for any discerning reader, the transition from Chapter 2 to Chapter 3 is jarring in the very least. I remember feeling this jarring sensation when I first read the Gita, but as I said, it took me a while to figure out its resolution.

Chapter 1 sets the scene of the ensuing battle, and it is in Chapter 2 that the main spiritual teaching begins. After Arjuna collapses in a fit of despair, panic and disillusionment and asks Krishna for help, Krishna gives a broad outline of the main teachings of the Gita. Krishna tells Arjuna that he need not fear, that the essence of him is eternal and indestructible, and that he should perform his noble duty with honour. Krishna, still in Chapter 2, then goes on to describe the path to spiritual liberation, the path of yoga in which one should be equanimous of mind amidst daily life and also practice withdrawing the senses and enter into a meditative samadhi in which the mind is controlled and allowed to become still, unphased by sense-objects and desires. Krishna spends a considerable number of verses on this theme, finally stating that this will lead to the attainment of Brahman, or the Absolute or God, in which there is no suffering or delusion.

However, when we come to chapter 3, seemingly oblivious to what Krishna has just instructed him, Arjuna asks him a completely unrelated question:

3.1 O Krishna, if you say that knowledge is superior to action, why ask me to fight in this terrible battle?

Krishna has not spoken in any great length about knowledge thus far, the main emphasis of the teaching being on yoga and meditative samadhi. Krishna has also not explicitly said that knowledge is superior to action, something that comes later in chapter 4 (4.33, see below). Admittedly, in the next verse of chapter 3 Arjuna does say he is confused:

3.2 My mind is confused, your words seem contradictory. Please clarify to me which path will lead me to the greatest good?

If we take the question at face value, Arjuna is implying that Krishna has taught two seemingly opposed teachings and Arjuna is unsure of how these can be reconciled. However, thus far, there has not been any substantive conflicting teaching given. Of course, all these issues are easily and happily resolved when we simply switch the position of Chapters 3 and 4. Before we look at how this resolution occurs, lets see Krishna’s response to Arjuna, still in Chapter 3:

Without swapping Chapters 3 and 4 around, this verse makes little sense. Krishna has not yet outlined two yogas, that of Jnana Yoga and Karma Yoga. He does, however, outline these in Chapter 4.

Let us now look at Chapter 4 – what I think should actually be Chapter 3. If we recall, Chapter 2 ends with Krishna speaking at length on the path of meditative yoga in which the senses should be withdrawn, the mind controlled and stilled, and desires for sense-pleasures effaced. This, Krishna says, will lead to Brahman, or God. Chapter 4 opens as follows, logically continuing from this conclusion in Chapter 2:

4.1 Krishna said: I taught this eternal yoga to Vivasvan [the sun god]; Vivasvan taught it to Manu [the father of humanity]; Manu passed it to King Iksvaku

This makes complete sense as the start of Chapter 3 and would avoid the jarring switch to Arjuna’s question about the two paths that are not described until later on in the current text. What Krishna explains in Chapter 4 is a logical continuance of explaining the origins of the yoga described in the latter part of Chapter 2.

In Chapter 4, Krishna goes on to reveal to Arjuna that he, Krishna, is not merely a trusted friend and charioteer, but actually God-incarnate who manifests in every age when he is needed to impart spiritual wisdom to humanity. He briefly describes the benefits of worshipping Him and other Gods, and introduces and explains the teaching on the path of action or Karma Yoga starting at around verse 4.14 to around 4.32.

Then, starting at verse 4.33 through to the last verse 4.42, Krishna introduces and explains the path of knowledge (Jnana). Verse 4.33 is particularly important, as it implies that Jnana is a higher path than that of Karma:

4.33 Better than sacrifice of material goods is sacrifice in Jnana, for action culminates in Jnana

This now makes sense of Arjuna’s question in 3.1 when he states that Krishna has placed knowledge higher than action. The last two verses of the chapter, verses 4.41 and 4.42, are also potentially quite confusing, as 4.41 states that action should be renounced, while 4.42 encourages Arjuna to stand and fight:

4.41 One who has given up action through yoga, and has dispelled doubts by knowledge, one who lives in the Self, is not bound by action (karma).

4.42 Therefore, Arjuna, with the sword of knowledge (jnana) remove the doubts in yourself, and taking refuge in yoga, stand and fight.

Given this context, with Krishna having just explained the two seemingly different paths of karma yoga and jnana yoga, and then ended his discourse by stating actions are to be renounced (4.41), and then to stand and fight (4.42), it is completely understandable that Arjuna is confused. His questions in verses 3.1 and 3.2 (see above) make complete sense now and we lose that jarring sensation that was previously present when we go from Chapter 2 to Chapter 3. Krishna’s response in 3.3 also makes more sense in this context, as if we switch chapters 3 and 4, Krishna has just told Arjuna of the two paths: ‘Arjuna, as I have told you before, there are two paths…jnana yoga…and karma yoga..’.

Chapter 3 (what should in my view be Chapter 4) then explains and extols the virtues and benefits the path of karma yoga more fully.

At the start of Chapter 5 Arjuna continues along this line of questioning, asking Krishna:

Again, this makes more sense if Chapter 3 was actually Chapter 4 – otherwise why wait a whole chapter before asking this question? The whole thing flows much more like a normal conversation with Chapters 3 and 4 swapped around. Chapter 5 then says how both paths lead to the same goal, but that the path of action/Karma Yoga is superior.

Only at the end of Chapter 5 is the topic of meditation and withdrawal of the senses from the sense objects again taken up in verse 5.26-5.28.

Chapter 6 then goes on to explain how both paths end up with the mind being stilled, and that to start off with, the path is yoga in action, but the path ends with stillness of mind (verse 6.3). The rest of Chapter 6 is devoted to the path of meditation and stillness of mind, with a few verses now introducing the teachings of Bhakti (devotion to or love of God) in verses 6.29-6.32.

With just the simple swapping around of chapters 3 and 4, in my view the potency and philosophical narrative of the Bhagavad Gita greatly enhanced. Themes are introduced in a wonderfully natural and logical way, with one theme leading into another –  a beautiful and coherent development of ideas, as follows: from an overview of the teachings in Chapter 2, to an introduction to the two main paths in Chapter 4, then firstly focussing on the path of action in Chapters 3 and 5, and then to the more advanced path of meditation in Chapter 6, and then the introduction to Bhakti, a theme that is progressively developed in the next 6 chapters (chapters 7 to 12).

So my suggested order is as follows:

So, what do you think? Is the way I am looking at it correct? Even though I have been reading and studying these texts for over 20 years, I do not consider myself to be an expert and I am not a sanskrit scholar either. My suggestion is to simply swap around chapters 3 and 4 when you read the Bhagavad Gita. Please let me know your views in the comments.