For those who resonate…

Devote yourself to God (That Divinity which is nothing but your own Self) daily, give yourself to Him* daily, put Him first, rest upon Him in all things.

Guided by Him (who is the True Teacher or True Guru): surrender to Him, talk to Him, sing to Him, praise Him, move with Him, allow Him to guide you: guide your thoughts, move through you, speak through you and to replenish You;

Be with Him, in Him, with Him in You;
Lovingly, take his lead, follow His lead;

*Or Her or That, as you prefer

Turn towards Him, who resides within:

In Jesus’s teachings we find numerous verses like this asking us to turn away from the world of objects (ie. Maya) and towards the Lord who resides within – I have compiled a selection here, Namaste

Those crazy-minded people who do not know as real anything other than the objects of the senses, and who are thereby ruined, will term the jnana that flourishes luxuriantly through dispassion towards sense-objects ‘dry Vedanta’

The way to the Truth Within (ie. jnana, meaning wisdom or knowledge), which, for practical purposes, is within each and everyone of us, has always meant we have to turn away from sense-objects, as well as mind-objects (ie. turn away from both gross and subtle objects).

However, for those tamasic and rajasic ones, who are attached to the sensory world of objects, they would call this type of teaching ‘dry’ or ‘life-opposing’ or ‘life denying’. However it is these so-called ‘life-affirming’ teachings that actually keep one in Maya-Samsara-Suffering, for the ‘life’ that is affirmed is simply ‘Maya’ (illusion) and continued suffering.

These people are ‘crazy-minded’ and ‘thereby ruined’ according to Sri Ramana, his somewhat harsh tone driving the point home emphatically in a compassionate attempt to reveal the true path to liberation.

Let us take heed, and turn away from body-mind-world and discover the Treasure that lies deep within us. Let us reject the small, temporary life of Maya-suffering and instead let us come upon and merge into Life Eternal Within, wherein we become One with Him, Our Beloved.

This video was recorded live during a Satsang meeting with Tom Das. 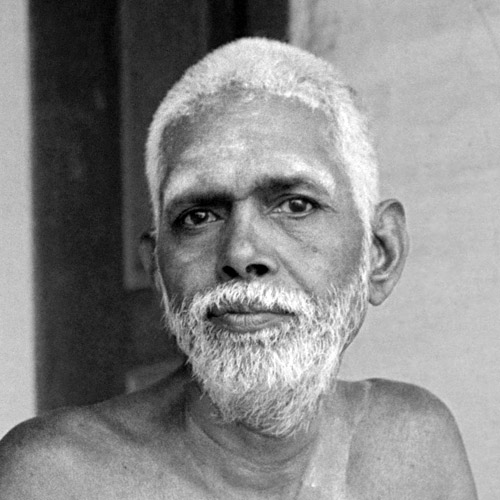 See also: IN BRIEF: HOW TO ATTAIN LIBERATION (MOKSHA)

Here a seeker asks Sri Ramana Maharshi how to find or ‘see’ God. When Ramana gives his usual answer, the seeker objects with a very common objection, let us see. The following dialogue has been recorded in the book Conscious Immortality, page 125:

Questioner: How is God to be seen?

Ramana Maharshi: Within. If the mind is turned inwards, God manifests as the inner consciousness.

Questioner: But isn’t God in all the objects we see around us?

Ramana Maharshi: God is in everything and in the seer. Where can God be seen? He cannot be found outside. He should be felt within. To see the objects, mind is necessary, and to conceive God in them is only a mental operation. But that is not real. The consciousness within, purged of the mind, is felt as God.

We can see that Ramana states that to find God, or see God, one must turn within, away from objects and abide as the Consciousness within, the pure Subject, devoid of objects. The seeker responds with a philosophical argument that seems to make sense to the mind. The seeker’s reasoning is as follows: but if God is everywhere and everything, why must I turn within to find Him?

The problem is that while this seem philosophically correct and so makes sense (to the ego-mind!), it doesn’t work. Ramana Maharshi’s teaching is a practical guide. It actually works! Ramana does not simply say to us ‘All is God…All is Self…All is One’ or something similar and leave it at that. Ramana states that yes, God is All, but he cannot be found outside, only within.

What we see around us is also God, yes, but it is God as Maya, and is therefore unreal and gives rise only to suffering and confusion. Maya/the world may make us feel we are making progress by giving us superficial temporary realisations and insights together with philosophical platitudes and positive feelings, but this is simply ‘Maya’s way of ensnaring us’ and perpetuating the ego and suffering.

It is only when we turn within and attend to what is Real, namely our own very Self, that we then Abide as the Self and the above is seen for oneself. Only when we turn within, away from objects, do the Vedanta teachings  come alive. They are transformed from mere concepts to first-hand Reality, and suffering finally comes to an end. Only then is the body-mind identification destroyed. Only then is the infinite divine nature of the Self truly seen. Only then do we truly experience the Ananda or Blissful aspect of the Self.

We see the same teaching given in Ramana’s text ‘Who Am I?’, and knowing the above teaching, namely that we need to turn within, explains what could be seen as a rather strange answer to a question by Ramana:

Question: Is not everything the work of God?

Ramana Maharshi: Without desire, resolve, or effort, the sun rises; and in its mere presence, the sun-stone emits fire, the lotus blooms, water evaporates; people perform their various functions and then rest. Just as in the presence of the magnet the needle moves, it is by virtue of the mere presence of God that the souls governed by the three (cosmic) functions or the fivefold divine activity perform their actions and then rest, in accordance with their respective karmas. God has no resolve; no karma attaches itself to Him. That is like worldly actions not affecting the sun, or like the merits and demerits of the other four elements not affecting all pervading space.

Again, we can see here that Ramana does not simply write ‘yes, all is God, God does all, all is One’, or something similar, but puts forward a different conception of the Self which will orientate our practice as above. He is stating God or the Self is Still, Whole, Unmoving, Unaffected, Self-Shining and Actionless (ie. God or Self does nothing). It is Pure Consciousness, the Subject, the Source of all, and we are to attend to That only. This is how we are to conceive of or think of the Self in order to orientate our practice. This is all beautifully explained in The Path of Sri Ramana.

So, how can we know this is the only way? Try other teachings if you want! You will eventually see they don’t work – despite all the concepts, practices and words your suffering will continue! All other teachings are based upon objects, Maya (ie. they are based upon thoughts, feelings, sensations, body, mind, world, etc): they are therefore based upon that which is transient and temporary and so do not serve to be a good foundation for firm Happiness.

Until you turn within, suffering will continue! Whenever you attend to (ie. attach to) objects, you tacitly strengthen the ego-notion, so turn within, abide as the Self! It is what you truly are, it is the only constant!

IN BRIEF: HOW TO ATTAIN LIBERATION (MOKSHA)

The Path of Sri Ramana

In talk number 428 from the book Talks with Sri Ramana Maharshi, Ramana Maharshi selects 10 verses from Sivananda Lahari, a devotional work of 100 verses written by Sri Sankara. In it, Bhakti is described, and Ramana has provided his own free translations of the meaning of the verses. So, here in the following text we have in effect a combined statement on Bhakti from both Shakara and Ramana!

!Praise and blessings to Sri Ramana and Sri Shankara!

Just as the ankola fruit falling from the tree rejoins it or a piece of iron is drawn to magnet, so also thoughts, after rising up, lose themselves in their original source. This is bhakti. The original source of thoughts is the feet of the Lord, Isvara. Love of His Feet forms bhakti. (Verse 61)

The thick cloud of bhakti, formed in the transcendental sky of the Lord’s Feet, pours down a rain of Bliss (ananda) and fills the lake of mind to overflowing. Only then the jiva, always transmigrating to no useful end, has his real purpose fulfilled. (Verse 76)

Devotion to gods, who have themselves their origin and end, can result in fruits similarly with origin and end. In order to be in Bliss everlasting our devotion must be directed to its source, namely the Feet of the ever blissful Lord. (Verse 83)

(4) Bhakti is a matter only for experience and not for words:

How can Logic or other polemics be of real use? Can the ghatapatas (favourite examples of the logicians, meaning the pot and the cloth) save you in a crisis? Why then waste yourself thinking of them and on discussion? Stop exercising the vocal organs and giving them pain. Think of the Feet of the Lord and drink the nectar! (Verse 6)

(5) Immortality is the fruit of Devotion:

At the sight of him who in his heart has fixed the Lord’s Feet, Death is reminded of his bygone disastrous encounter with Markandeya and flees away. All other gods worship only Siva, placing their crowned heads at His feet. Such involuntary worship is only natural to Siva. Goddess Liberation, His consort, always remains part of Him. (Verse 65)

(6) If only Devotion be there – the conditions of the jiva cannot affect him.

However different the bodies, the mind alone is lost in the Lord’s Feet. Bliss overflows! (Verse 10)

Wherever or however it be, only let the mind lose itself in the Supreme. It is Yoga! It is Bliss! Or the Yogi or the Bliss incarnate! (Verse 12)

To worship God with flowers and other external objects is troublesome. Only lay the single flower, the heart, at the feet of Siva and remain at Peace. Not to know this simple thing and to wander about! How foolish! What misery! (Verse 9)

(9) This Karma Yoga puts an end to one’s samsara:

Whatever the order of life (asrama) of the devotee, only once thought of, Siva relieves the devotee of his load of samsara and takes it on Himself. (Verse 11)