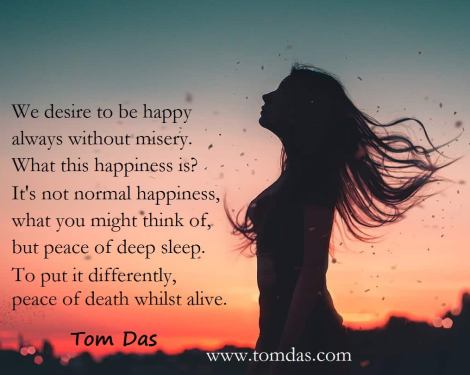 We desire to be happy always without misery. What is this happiness? It’s not normal happiness, what you might think of, but the peace of deep sleep. To put it differently,  it’s the Peace of death whilst alive.

When mind ends what you are is.

When you let go of everything…what is true, what is unchanging, what will never be destroyed, will be there fully.

When you let go of everything, that which is true, which cannot be destroyed, which is pure, that which always is…that God, that Divine, that One, that holiness, that will be there. Always…

If we can have faith in that, just let go of everything and That will be there. You don’t have to look for it, because it’s real. Everything else that is false will fall away. That which is real will be there. 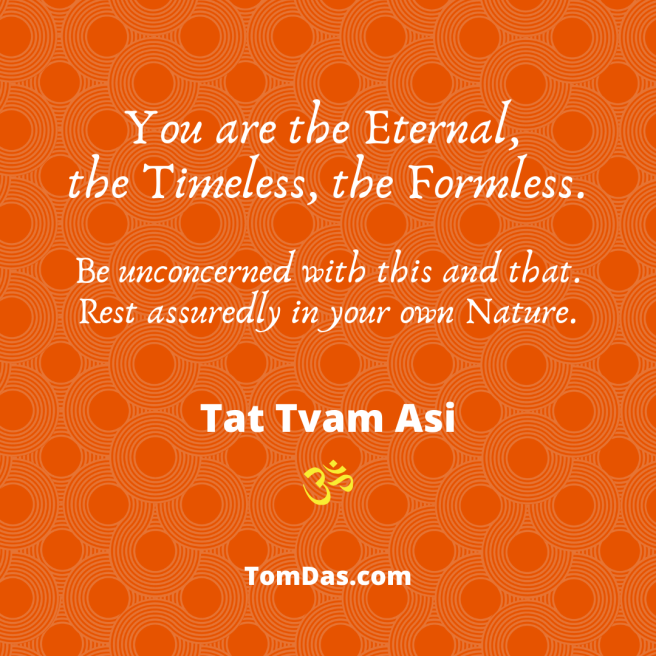 The the following talks, Bhagavan Sri Ramana Maharshi outlines a very simple but powerful teaching, that of wakeful-sleep or Jagrat-Sushupti (Jagrat means the waking state, Sushupti means deep dreamless sleep). This teaching in essence is no different to the other teachings of Sri Ramana Maharshi, and is also no different to the great Vedanta teachings, but is just another way of expressing the same principle.

The method consists of noting that in deep dreamless sleep the mind is still and there is no suffering, but there is also no awareness of this fact at the time. In the waking state we are presently aware, but thoughts and suffering also exist.

Therefore the method is that of remaining awake but with the thoughts stilled. Ramana says this is the state of Jagrat-Sushupti, which is also the state of the Jnani (the knower of truth or the enlightened sage). Ramana states this jagrat-susupti is also called Samadhi (talks 286, 313) and that it is also Mukti (liberation, talk 311) and bliss (talks 609, 372).

I will start with an excerpt from Talk 609 as this goes into the most detail, and the opening paragraphs alone contain many gems that should be carefully contemplated on. Thereafter the talks are chronological, with bold added by myself for emphasis.

Wishing you the eternal peace that is already ever-present 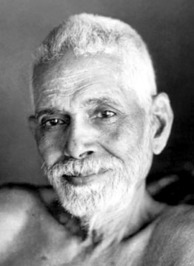 “Be still and know that I AM God”.

So stillness is the aim of the seeker. Even a single effort to still at least a single thought even for a trice goes a long way to reach the state of quiescence. Effort is required and it is possible in the waking state only. There is the effort here: there is awareness also; the thoughts are stilled; so there is the peace of sleep gained. That is the state of the Jnani. It is neither sleep nor waking but intermediate between the two. There is the awareness of the waking state and the stillness of sleep. It is called jagrat-sushupti.

Call it wakeful sleep or sleeping wakefulness or sleepless waking or wakeless sleep. It is not the same as sleep or waking separately. It is atijagrat (beyond wakefulness) or atisushupti (beyond sleep).

Go to the root of the thoughts and you reach the stillness of sleep. But you reach it in the full vigour of search, that is, with perfect awareness. That is again jagrat-sushupti spoken of before. It is not dullness; but it is Bliss. It is not transitory but it is eternal. From that the thoughts proceed. What are all our experiences but thoughts? Pleasure and pain are mere thoughts. They are within ourselves. If you are free from thoughts and yet aware, you are That Perfect Being.

Sushupti continues in this state also. We are ever in sushupti. That should be consciously gone into and realised in this very state. There is no real going into or coming from it. Becoming aware of that is samadhi.

Bring sleep into the waking state (jagrat sushupti) and you will be all right.

The Self who was undifferentiated in sleep is differentiated in the present state, and sees the diversity. The Real Existence is the only One devoid of objective knowledge. That is absolute consciousness. That is the state of happiness, as admitted by all of us. That state must be brought about even in this waking state. It is called jagrat sushupti. That is mukti.

Take another example: A passenger in a cart has fallen asleep. The bulls move or stand still or are unyoked on the journey. He does not know these occurrences, but finds himself in a different place after he wakes up. He has been blissfully ignorant of the occurrences on the way, but his journey has been finished.

Similarly with the Self of the person. He is asleep in the body. His waking state is the movement of the bulls, his samadhi is their standing still (because samadhi = jagrat sushupti) i.e., to say, he is aware of but not attached to actions. So the bulls are in harness but do not move. His sleep is the unyoking of the bulls, for there is complete suspension of activities corresponding to the release of the bulls from the yoke.

D.: Sleep state is said to be the experience of Bliss, yet, on recollecting it the hairs do not stand on end. Why should they do so, if the samadhi state is recollected?

M.: Samadhi means sleep in waking state (jagrat sushupti). Bliss is overpowering and the experience is very clear, whereas it is different in sleep.

Someone: The limitation (upadhi) of being a man cannot be got rid of.

M.: How were you in deep sleep? There was no thought of being a man.

Another: So, the state of sleep must be brought about even when one is awake.

M.: Yes. It is jagrat-sushupti.

What is peace? Although the world persists when a man is in deep sleep, does he have any cares concerning it? His mind is tranquil and refreshed. Should his mind be in the same degree calm and refreshed even when he is face to face with the world and is active therein, then there is peace. 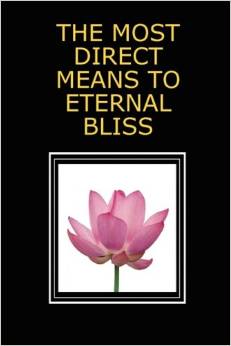 Here is another chapter from the book ‘The Most Direct Means to Eternal Bliss’. For my initial (and brief) opinion on this controversial but useful book click here. This chapter focuses on thought and how thought gets in the way of direct communion with that which lies beyond thought. END_OF_DOCUMENT_TOKEN_TO_BE_REPLACED

I was reading a passage from J. Krishnamurti’s slim book called meditations which reminded me of a passage from The Gospel According to Matthew. The language they use is strikingly similar. I’ll start with the biblical passage as it’s shorter: