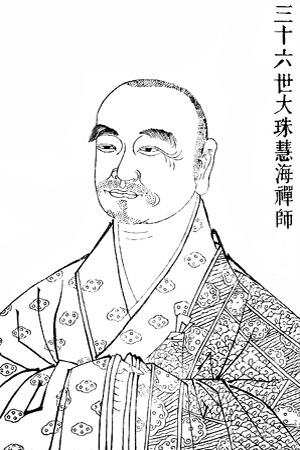 It’s all too common for seekers of enlightenment to fall into conceptual traps. Rather than using beliefs to free themselves from beliefs all together, the verbal teachings are instead often clung to, like a drowning man clutching at a straw.

One concept that can be useful along the way is that of the Absolute, but like all concepts it is also a potential trap, in that we can fall into believing in the Absolute without any real experience, or worse, only a partial experience that gives us the false impression we actually know something when we in fact do not.

In this following passage we see Ch’an Master Hui Hai in dialogue with a Tripitaka master, (The Tripitaka are the traditional written scriptures of Buddhism, so this Tripitaka master is a scholar of the written Buddhist scriptures). Deliberately Hui Hai gives the ‘wrong’ non-traditional answer initially in order to free the questioner from fixed views and show that the Teaching (Dharma) can be expressed in a myriad of ways.

At the end  of the dialogue the Tripitaka master expresses his respect and amazement at how the Southern school – the ‘Zen’ school of sudden enlightenment of which Hui Hai is part – is truly unfathomable:

Once a Tripitaka Master asked: “Does the Bhutatathata (Absolute Reality) ever change?”

The Master [Hui Hai] replied: “Yes, it does change.”

The Tripitaka Master retorted: “You, Venerable Ch’an Master, are wrong!”

The Master then asked the Tripitaka Master: “Does the Bhutatathata exist or not?”

The Tripitaka Master answered: “Yes, the Bhutatathata does exist.”

The Master replied: “So if you say it does not change, then you are just an ordinary, worldly monk. Doubtlessly, by now you must have heard that the lowest vices can be changed into the highest virtues, the three poisons into the three cumulative disciplines, the six consciousnesses into the six supernatural powers, all the defilements into Bodhi, and the most abysmal ignorance into the highest wisdom. Thus, if you say that the Bhutatathata does not change, then you, a Tripitaka Master, are really a heterodox-sect follower. [ie. a heretic]”

The Tripitaka Master responded: “If you put it that way, then I have to admit that the Bhutatathata does change.”

The Master retorted: “But if you, indeed, hold that the Bhutatathata does change, that is also a heterodox view.”

The Tripitaka Master asked: “Ch’an Master, you just said that the Bhutatathata does change, but now you say it does not change. How can that be?”

The Tripitaka Master concluded: “Now I really understand what is meant when it is said that the Southern Ch’an Sect is truly unfathomable!”

This last answer of Hui Hai is particularly instructive – he essentially states that the Truth expresses itself in different ways, just like jewels can be of various colours. If one has intuitively seen this Truth, then one can correctly express this truth, even with seemingly opposed verbal statements, as these statements are coming from a ‘place of Truth’. However, for one who has not seen, the verbal statements are always incorrect, even when they are ‘officially correct’, as the essential insight is not present, and the statements are not expressions of Truth but expressions of the ignorant ego-mind.

These ego/ignorance-ridden statements are not liberating – they are simply a clinging to an empty doctrine. These insight-less statements merely give strength to the false-ego that thinks it knows something, strengthening and perpetuating the ego/sense of separation of both the one speaking and anyone listening.

4 thoughts on “Zen Master Hui Hai: does the Absolute ever change?”