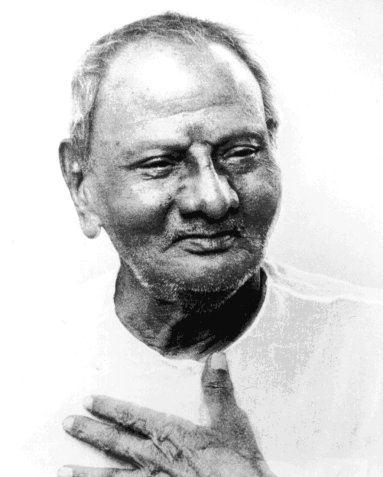 The following text is a summary of Nisargadatta Maharaj’s teaching and was written by Maurice Frydman, the translator and editor of ‘I Am That’, Nisargadatta’s most widely read work. The text was entitled ‘Nisarga Yoga’ which, as Maurice Frydman explains below, means ‘the easy or natural yoga’, and it was originally published as an appendix to ‘I Am That’.

The text below is essentially the same as how it was originally published except for my addition of bold type for emphasis of what I felt were key points for a seeker of liberation.

I have also made a compilation of direct quotes from Nisargadatta Maharaj which fully explains his method for the discerning reader.

Wishing you peace and realisation

In the humble abode of Sri Nisargadatta Maharaj, but for the electric lights and the noises of the street traffic, one would not know in which period of human history one dwells. There is an atmosphere of timelessness about his tiny room; the subjects discussed are timeless – valid for all times; the way they are expounded and examined is also timeless; the centuries, millennia and yugas fall off and one deals with matters immensely ancient and eternally new.

The discussions held and teachings given would have been the same ten thousand years ago and will be the same ten thousand years hence. There will always be conscious beings wondering about the fact of their being conscious and enquiring into its cause and aim. Whence am I? Who am I? Whither am I? Such questions have no beginning and no end. And it is crucial to know the answers, for without a full understanding of oneself, both in time and in timelessness, life is but a dream, imposed on us by powers we do not know, for purposes we cannot grasp.

Maharaj is not a learned. There is no erudition behind his homely Marathi; authorities he does not quote, scriptures are rarely mentioned; the astonishingly rich spiritual heritage of India is implicit in him rather than explicit. No rich Ashram was ever built around him and most of his followers are humble working people cherishing the opportunity of spending an hour with him from time to time.

Simplicity and humility are the keynotes of his life and teachings; physically and inwardly he never takes the higher seat; the essence of being on which he talks, he sees in others as clearly as he sees it in himself. He admits that while he is aware of it, others are not yet, but this difference is temporary and of little importance, except to the mind and its ever-changing content. When asked about his Yoga, he says he has none to offer, no system to propound, no theology, cosmology, psychology or philosophy. He knows the real nature – his own and his listeners’ – and he points it out. The listener cannot see it because he cannot see the obvious, simply and directly. All he knows, he knows with his mind, stimulated with the senses. That the mind is a sense in itself, he does not even suspect.

The Nisarga Yoga, the ‘natural’ Yoga of Maharaj, is disconcertingly simple – the mind, which is all becoming, must recognise and penetrate its own being, not as being this or that, here or there, then or now, but just as timeless being.

This timeless being is the source of both life and consciousness. In terms of time, space and causation it is all-powerful, being the causeless cause; all-pervading, eternal, in the sense of being beginningless, endless and ever-present. Uncaused, it is free; all-pervading, it knows; undivided, it is happy. It lives, it loves, and it has endless fun, shaping and re-shaping the universe. Every man has it, every man is it, but not all know themselves as they are, and therefore identify themselves with the name and shape of their bodies and the contents of their consciousness.

To rectify this misunderstanding of one’s reality, the only way is to take full cognisance of the ways of one’s mind and to turn it into an instrument of self-discovery. The mind was originally a tool in the struggle for biological survival. It had to learn the laws and ways of Nature working hand-in-hand can raise life to a higher level. But, in the process the mind acquired the art of symbolic thinking and communication, the art and skill of language. Words became important. Ideas and abstractions acquired an appearance of reality, the conceptual replaced the real, with the result that man now lives in a verbal world, crowded with words and dominated by words.

Obviously, for dealing with things and people words are exceedingly useful. But they make us live in a world totally symbolic and, therefore, unreal. To break out from this prison of the verbal mind into reality, one must be able to shift one’s focus from the word to what it refers to, the thing itself.

The most commonly used word and most pregnant with feelings, and ideas is the word ‘I’. Mind tends to include in it anything and everything, the body as well as the Absolute. In practice it stands as a pointer to an experience which is direct, immediate and immensely significant. To be, and to know that one is, is most important. And to be of interest, a thing must be related to one’s conscious existence, which is the focal point of every desire and fear. For, the ultimate aim of every desire is to enhance and intensify this sense of existence, while all fear is, in its essence, the fear of self-extinction.

To delve into the sense of ‘I’ – so real and vital – in order to reach its source is the core of Nisarga Yoga. Not being continuous, the sense of ‘I’ must have a source from which it flows and to which it returns. This timeless source of conscious being is what Maharaj calls the self-nature, self-being, swarupa.

As to the methods of realising one’s supreme identity with self-being, Maharaj is peculiarly non-committal. He says that each has his own way to reality, and that there can be no general rule. But, for all the gateway to reality, by whatever road one arrives to it, is the sense of ‘I am’. It is through grasping the full import of the ‘I am’, and going beyond it to its source, that one can realise the supreme state, which is also the primordial and the ultimate. The difference between the beginning and the end lies only in the mind. When the mind is dark or turbulent, the source is not perceived. When it is clear and luminous, it becomes a faithful reflection of the source. The source is always the same – beyond darkness and light, beyond life and death, beyond the conscious and the unconscious.

This dwelling on the sense ‘I am’ is the simple, easy and natural Yoga, the Nisarga Yoga. There is no secrecy in it and no dependence; no preparation is required and no initiation. Whoever is puzzled by his very existence as a conscious being and earnestly wants to find his own source, can grasp the ever-present sense of ‘I am’ and dwell on it assiduously and patiently, till the clouds obscuring the mind dissolve and the heart of being is seen in all its glory.

The Nisarga Yoga, when persevered in and brought to its fruition, results in one becoming conscious and active in what one always was unconsciously and passively. There is no difference in kind – only in manner – the difference between a lump of gold and a glorious ornament shaped out of it. Life goes on, but it is spontaneous and free, meaningful and happy.

Maharaj most lucidly describes this natural, spontaneous state, but as the man born blind cannot visualise light and colours, so is the unenlightened mind unable to give meaning to such descriptions. Expressions like dispassionate happiness, affectionate detachment, timelessness and causelessness of things and being – they all sound strange and cause no response. Intuitively we feel they have a deep meaning, and they even create in us a strange longing for the ineffable, a forerunner of things to come, but that is all. As Maharaj puts it: words are pointers, they show the direction but they will not come along with us. Truth is the fruit of earnest action, words merely point the way.