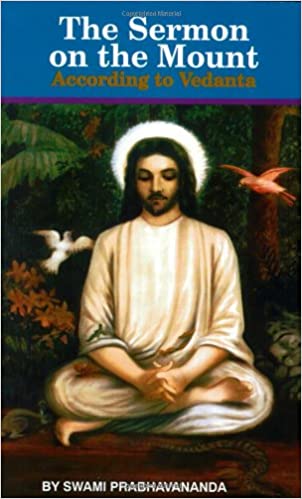 From the Introduction of the above book:

Like Krishna and Buddha, Christ did not preach a mere ethical or social gospel but an uncompromisingly spiritual one. He declared that God can be seen, that divine perfection can be achieved.

In order that men might attain this supreme goal of existence, he taught the renunciation of worldliness, the contemplation of God, and the purification of the heart through the love of God.

These simple and profound truths, stated repeatedly in the Sermon on the Mount, constitute its underlying theme, as I shall try to show in the pages to follow.

From the back cover:

‘The Sermon on the Mount According to Vedanta’ is a spiritual document of the most profound significance and importance. Swami Prabhavananda, a leading modern exponent of the ancient Hindu religion of Vedanta, is a member of a Vedantic Order that pays equal respect to the teachings of Christ. His early training and subsequent years of meditation provide a background for an interpretation of the Sermon on the Mount that offers rare, two-fold enlightenment to the Western reader.

On the one hand, the author provides new illumination of the vital core truths of Christianity. On the other, he eloquently reveals the basis and meaning of Vedanta.

His work achieves a magnificent reconciliation of Eastern and Western thought – a supreme embodiment of a vision that truly see all things as part of the One within the universal scheme of being.

One thought on “The Sermon on the Mount According to Vedanta (Jesus, Christanity, Advaita and Non-Duality)”