So the volunteer who usually edits and puts together my videos is no longer able to do so. This has resulted in me surfing the internet and learning how to edit videos myself! Below is my first video, edited and put together by…well…me! It was recorded live during Thursday’s online meeting, so the picture quality is not as good as it could be. Subscribe to the YouTube channel if you want to receive more of these videos, tell me what you think and enjoy 🙂

ps. if you know anyone who would be willing to help edit videos for me please let me know, with thanks 🙏 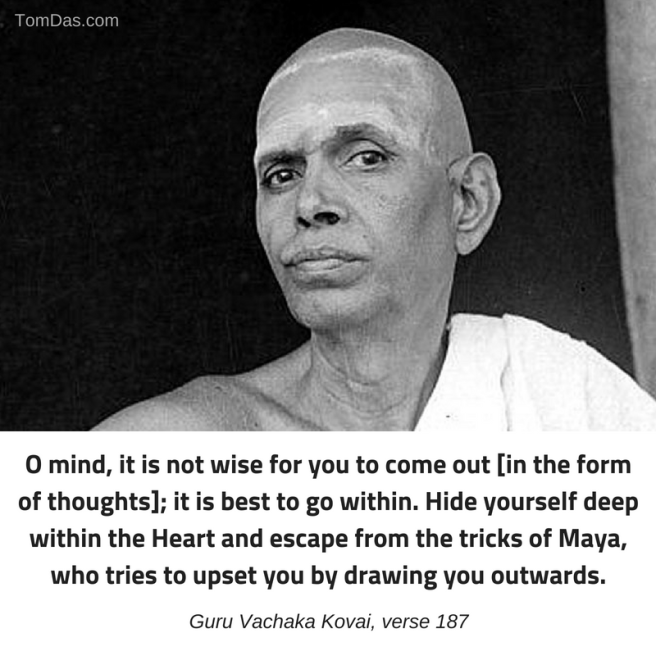 I have taken the following teaching statements of Sri Ramana Maharshi from the wonderful text Guru Vachaka Kovai. My advice is to stick to Sri Ramana’s teachings to keep your path straight:

175. The only worthy occupation is to thoroughly absorb the ego by turning Selfward and, without allowing it to rise, to thus abide quietly, like a waveless ocean, in Self-Knowledge, having annihilated the delusive mind-ghost, which had been wandering about unobstructed.

186. O miserable and extroverted people, failing to see the seer, you see only the seen! To dissolve duality by turning inwards instead of outwards is alone Blissful.

187. O mind, it is not wise for you to come out [in the form of thoughts]; it is best to go within. Hide yourself deep within the Heart and escape from the tricks of Maya, who tries to upset you by drawing you outwards.

189. Since it is only the notion of duality that spoils Bliss and causes misery, to avoid yielding to the attractions of that notion and to thus arrest all chitta vrittis is alone worthwhile.

190. O people, not knowing that Shiva is dwelling within you, you fly about like birds from one holy place to another [seeking His Darshan]. Consciousness, when abiding still in the Heart, is the Supreme Shiva.

192. To arrest the mind – which tries to rush outwards – securely within, is the truly heroic act of the ripe aspirant who wants to see the Supreme Lord in the Heart.

193. When the mind [i.e., the ego’s attention] which wanders outside, knowing only other objects [2nd and 3rd persons] – begins to attend to its own nature, all other objects will disappear, and then, by experiencing it’s own true nature [i.e. Self], the pseudo-‘I’ will also die.

204. A peaceful attitude, together with a ‘silent-flow’ of mind towards undeviating abidance in Self, Sat-Chit, is the best worship of Shiva.

205. Saint Markandeya survived death by conquering even Yama, and lived beyond his destined time. Know, therefore, that death can be overcome by worshipping Shiva, the death-killer.

291. If one wants to be saved, one is given the following true and essential advice: just as the tortoise draws all its five limbs within its shell, so one should draw the five senses within and turn one’s mind Selfward. This alone is happiness.

293. Having known for certain that everything which is seen, without the least exception, is merely a dream, and that it [the seen] does not exist without the seer, turn only towards Self – Sat-Chit-Ananda – without attending to the world of names and forms, which is only a mental conception.

294. Attention to one’s own Self, which is ever shining as ‘I’, the one undivided and pure Reality, is the only raft with which the jiva, who is deluded by thinking “I am the body”, can cross the ocean of unending births.

296. Having annihilated the delusive mind which always dwells upon worldly things, having killed the restless ego, and having completely erased the worldly vasanas, shine as Shiva, the pure Consciousness Itself.

297. Do not wander outside, eating the scorching sand of worldly pleasures, which are non-Self; come home to the Heart where Peace is shining as a vast, everlasting, cool shade, and enjoy the feast of the Bliss of Self.

319. One’s merging into the Heart – through the enquiry into the nature of the ego, which is a delusion in the form of mind – is the right worship of the Lotus-Feet of the supreme Mouna-Guru, who is beyond the mind.

When you take yourself to be real, the world also seems real. Then problems too seem to exist, and with it suffering.

Please know this directly: all this is empty, all this is zero. Just like a dream, there is only You, so there is nothing to fear.

God, guru, and the apparent world – all these are You.

Your nature is peace, love and happiness. You need nothing. You are ever-whole, ever-complete, ever-undefiled.

Your nature is naturally unattached, without desire, unchanging and at peace.

So don’t take this body-mind-world to be real (they will take care of themselves). Instead be what you are: be at peace, be happy and rest naturally, ever-unchanging and unattached.

Q. Hey Tom. I had one question to ask, if you don’t mind. Is Mukti (liberation) even there? Is there something called Liberation? If it’s there here and now, why don’t I feel it? And when it should be the most obvious thing, that is my own existence, why don’t I experience it, or rather recognize it? And what is the purpose of the world if it exists but doesn’t exist. A complete paradox, isn’t it?

Tom: Who says you are missing it? The mind?

Tom. Why believe the mind? Be still my friend ❤

Q. So belief is the reason for all misery, isn’t it?

Tom: Bondage is an illusion of the mind only. Bondage = suffering.

Q. Be still and know that I’m God. But I know this well, I experience it, sometimes. But when problems arise, I’m carried away with it. How to recollect the Self always?

Q. What is the best way of practicing this? Apart from Self-enquiry?

Q. Okay. I will read it. But liberation itself is an idea that I have to let go to completely enjoy bliss, isn’t it?

Tom: Have a read

Q. Thanks. It was a great read.

Here are 3 stories for you:

One morning God wakes up. She realises, non-verbally, intuitively, that she is whole-complete and lives happily ever after.

One morning God wakes up. God thinks he is small, separate and vulnerable. This leads him to fear for his survival and desire security and relief from his fear (pleasure).

God visits Guru and Guru says all is well, you are already whole and complete. Separation and the ‘small me’ are illusions.

God resonates with this teaching, intuitively sees what is being pointed at is already the present-reality, and the sense of inadequacy associated with the belief in separation dissolves. God realises that the separation between God, Guru and Life are themselves illusory. There is no teacher or teaching.

He lives happily ever after

It is the same as story 2, except for the last line:

Once God’s meeting with Guru ends, due to the force of the momentum of past beliefs which have been so deeply ingrained over a lifetime, God quickly starts to re-believe that she is a separate ‘me’.

Every time she meets Guru, the ‘me’ temporarily collapses and great relief is experienced, but after sometime the false beliefs keep on rising up. The belief in the false me seems to have a mind of its own, rising up choicelessly, seemingly wreaking havoc and destruction.

Over time God’s mind becomes peaceful, happier and less interested in and addicted to thoughts and beliefs. The habitual tendency to believe in a ‘me’ is lessened.

Guru has also all the time has been saying all is well, you are already whole and complete. Separation and the ‘small me’ are illusions.

Now when God is away from Guru, the old beliefs in ‘me’ no longer arise. God sees that all practices are for the illusory ‘me’ and they perpetuate the illusory ‘me’, but they were still part of her apparent journey.

The sense of inadequacy associated with the belief in separation dissolves. God realises that the separation between God, Guru and Life are themselves illusory. There is no teacher or teaching.

She lives happily ever after.