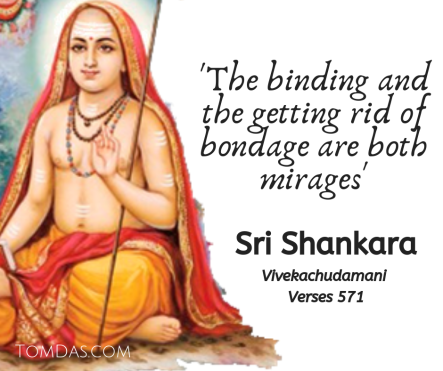 In the traditional path of Knowledge or Jnana, first we are to know our True Self (Atman) and know this to be the same as the Absolute (Brahman). Then we are to be still and renounce all desires.

This spiritual knowledge (Jnana) of ‘I am Brahman’ (Aham Brahmasmi) allows the mind to become still and desireless. Note this does not mean that the body becomes totally inert – no – rather it continues to function naturally according to its destiny (Prarabdha Karma) until the body dies.

And [the Self] being eternal, it is not to be secured by any means other than the cessation of ignorance. Hence the only duty is to renounce all desires after the realisation of the unity of the indwelling Self and Brahman.

This is akin to Self-Surrender, as spoken by Sri Ramana Maharshi:

There is no destiny. Surrender, and all will be well. Throw all the responsibility on God. Do not bear the burden yourself. What can destiny do to you then?”

Question: Surrender is said to be Bhakti [the path of devotional love]. But Sri Bhagavan [Ramana Maharshi] is known to favour enquiry [ie. the path of Knowledge or Jnana] for the Self. There is thus confusion in the hearer.

Ramana Maharshi: Surrender can take effect only when done with full knowledge. Such knowledge comes after enquiry. It ends in surrender.