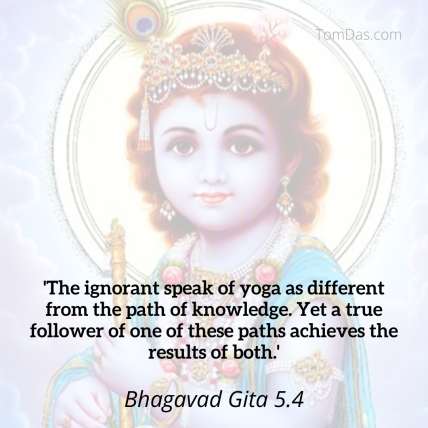 Q. Can you briefly define Jnana Yoga vs Bhakti Yoga and how they relate to Advaita and Vedanta?

Tom: Jnana yoga usually refers to the use of (intellectual) knowledge in the mind used to remove ignorance, a thorn to remove a thorn, and then the thorn of ‘knowledge’ is itself allowed to fall away; Bhakti yoga is faith, love and devotion from the heart to Self/Guru/God. These 2 yogas seem different at first, but then they quickly merge together to remove ignorance and end suffering, which is what the word ‘yoga’ means of course. Both of the above are part and parcel of Advaita Vedanta as per the Upanishads, Gita, etc.

Q. What about Advaita vs. Jnana?

Advaita, literally means not-two. Jnana means knowledge. Jnana can either mean relative knowledge in the mind, which is the means of jnana yoga, or it can refer to the Absolute, which is not really knowledge per se as it is beyond ideas/conceptualisation, but the word Jnana is sometimes used nonetheless. This ‘absolute Jnana’ is synonymous with Advaita and points to that which is beyond both Advaita and Jnana, ie. God or True Self! It is also known as Parabhakti (divine love), Aparokshanubhuti (direct experience), Moksha (freedom) and various other terms, none of which fully capture what is spoken of!

One thought on “Q. Can you briefly define Jnana Yoga vs Bhakti Yoga and how they relate to Advaita and Vedanta?”