Praise to those custodians of this wonderful knowledge and teaching!

Praise to the Self,

One and supreme in all its effulgent glory!

May we all be happy and free!

May we all realise the Self!

In his text Vivekachudamani Shankara writes 18 verses describing the Jnani (literally ‘knower’ or ‘one who knows’) or perfected sage, starting at verse 535. My comments are in blue throughout.

In these first few of these verses, the theme is a lack of attachment to the phenomenal world. Shankara uses phrases such as ‘he is neither grieved nor elated by sense objects’…’neither attached nor adverse to them [sense objects]… ‘without anxiety or humiliation’…’without fear’…’unattached to external things’…’experiences all sorts of sense objects as they come’. We can see that while the sage is (naturally) unattached, there is also no attempt to be detached either (which would actually be a form of attachment or striving).

Often detachment from sense-objects is emphasised at the level of a seeker engaging in sadhana (spiritual practice), but now there is no ignorance, there is no need to emphasise either detachment or attachment. A natural state of balance has been naturally achieved now the distorting/unbalancing effect of ignorance is no longer at play:

535. Satisfied with undiluted, constant Bliss, he is neither grieved nor elated by sense-objects, is neither attached nor averse to them, but always disports with the Self and takes pleasure therein.

536. A child plays with its toys forgetting hunger and bodily pains; exactly so does the man of realisation take pleasure in the Reality, without ideas of “I” or “mine”, and is happy.

In these above 2 verses, it is interesting to note that the flip-side of natural detachment is a natural resting in the ‘undiluted, constant Bliss’ of the Self. The Sage, completely satisfied by the self, does not notice or mind the suffering of the body. The resultant natural side effect of this is lack of both attachment and aversion to sense objects. Note that this means there is no need for supression of emotions or feelings or fear of any other phenomena.

The next 2 verses comment on the free-living aspect of the Jnani. The jnani is without self-image and finds the earth to be their home. Being without self-image, they do not necessarily dress or look a certain way (‘wears no outward mark’), and they allow what comes to come, and what goes to go. This last point is the same as stating there is no attachment or aversion to sense objects, and in verse 538 it is compared to the innocence of a child:

537. Men of realisation have their food without anxiety or humiliation by begging, and their drink from the water of rivers; they live freely and independently, and sleep without fear in cremation grounds or forests; their clothing may be the quarters themselves, which need no washing and drying, or any bark etc., the earth is their bed; they roam in the avenue of the Vedanta; while their pastime is in the Supreme Brahman.

538. The knower of the Atman, who wears no outward mark and is unattached to external things, rests on this body without identification, and experiences all sorts of sense-objects as they come, through others’ wish, like a child.

You can’t tell a jnani by clothes, behaviour, sex or age:

The sage can enjoy sense objects, but fundamentally cares not for them:

540. The sage, living alone, enjoys the sense-objects, being the very embodiment of desirelessness – always satisfied with his own Self, and himself present at the All.

The many appearances of a Jnani:

Not caring one iota for self-image, the Jnani may appear in multiple forms, but cares not about whether they are a king or a pauper, well revered or despised:

542. Though without riches, yet ever content; though helpless, yet very powerful, though not enjoying the sense-objects, yet eternally satisfied; though without an exemplar, yet looking upon all with an eye of equality.

The ‘eye of equality’ naturally arises when one does not prefer one set of sense-objects (ie. experiences) over another set. This lack of preference naturally occurs when one realises the Self and is satisfied as the Self.

The next verse juxtaposes the relative (doing, experiencing, possessing a body, limited)  with the absolute (inactive, untouched, unidentified, omnipresent), indicating that we can speak of reality using either set of langauge:

543. Though doing, yet inactive; though experiencing fruits of past actions, yet untouched by them; though possessed of a body, yet without identification with it; though limited, yet omnipresent is he.

The next verse goes one step further, showing that in truth the Jnani is nothing but the absolute in which there is not even the idea of a body, despite the appearance of one appearing:

544. Neither pleasure nor pain, nor good nor evil, ever touches this knower of Brahman, who always lives without the body-idea.

546. The sun which appears to be, but is not actually, swallowed by Rahu, is said to be swallowed, on account of delusion, by people, not knowing the real nature of the sun.

547. Similarly, ignorant people look upon the perfect knower of Brahman, who is wholly rid of bondages of the body etc., as possessed of the body, seeing but an appearance of it.

549. As a piece of wood is borne by the current to a high or low ground, so is his body carried on by the momentum of past actions to the varied experience of their fruits, as these present themselves in due course.

This next verse employs the beautiful imagery of comparing the Self to a pivot on a potter’s wheel. Whilst the pedal on moved, the pivot remains stationary, just as the two ends of a sea-saw move, but the pivot remains still amidst the movement. Similarly, whilst this world-appearance seems to be full of motion, the Self/Jnani is eternally still, at peace and free:

550. The man of realisation, bereft of the body-idea, moves amid sense-enjoyments like a man subject to transmigration, through desires engendered by the Prarabdha work. He himself, however, lives unmoved in the body, like a witness, free from mental oscillations, like the pivot of the potter’s wheel.

Next the imagery of a passive witness or ‘unconcerned spectator’ is utilised.  This is to convey the point that the jnani is without egoic or volitional desire (‘unconcerned’, without ‘the least regard’) but is aware (‘spectator’):

551. He neither directs the sense-organs to their objects nor detaches them from these, but stays like an unconcerned spectator. And he has not the least regard for the fruits of actions, his mind being thoroughly inebriated with drinking the undiluted elixir of the Bliss of the Atman.

The Jnani cares not about meditation or any other sadhana. The Jnani has transcended ignorance, meditation and sadhana only being required as a remedy for ignorance. When ignorance is no longer present (ie. seen to never have been real), and when the egoic tendencies (vasanas) to identify as a ‘me’ or body-mind have gone, then what need is there for meditation? Just as what need is there to prepare and implement a cure when the disease has now gone?

552. He who, giving up all considerations of the fitness or otherwise of objects of meditation, lives as the Absolute Atman, is verily Shiva Himself, and he is the best among the knowers of Brahman.

The Jnani is only ever Brahman (there is only Brahman), regardless of appearances that may suggest otherwise:

553. As an actor, when he puts on the dress of his role, or when he does not, is always a man, so the perfect knower of Brahman is always Brahman and nothing else.

Praise to those custodians of this wonderful knowledge and teaching!

Praise to the Self,

One and supreme in all its effulgent glory!

May we all be happy and free!

May we all realise the Self! 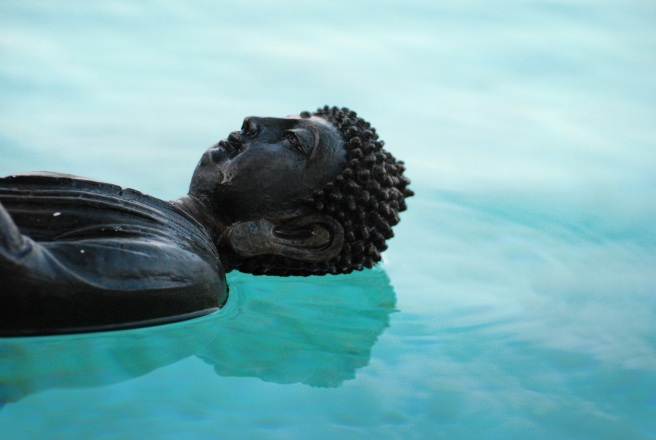 Q. Hi Tom, who do you think is the best spiritual teacher, or could you name some teachers you respect?

A. There is only One Teacher.

Q. Hi Tom, it’s been said that only a jnani* can tell if someone else is a true jnani. Is this true in your experience?

A. There are no jnanis, only jnana*

Freedom is everywhere. There is only freedom.

There is no individual freedom, only freedom, which is ‘freedom’ from individuality.

You can’t even say ‘freedom from individuality’ – that’s too much.

There is only freedom.

See it at once!